You should spend about 20 minutes on Questions 1-5, which are based on Reading Passage below.

Between the Inishowen peninsula, north west of Derry, and the Glens of Antrim, in the east beyond the Sperrin Mountains, is found some of Western Europe's most captivating and alluring landscape.

The Roe Valley Park, some 15 miles east of Derry is a prime example. The Park, like so many Celtic places, is steeped in history and legend. As the Roe trickles down through heather bogs in the Sperrin Mountains to the South, it is a river by the time it cuts through what was once called the 'garden of the soul'- in Celtic 'Gortenanima'.

The castle of O'Cahan once stood here and a number of houses which made up the town of Limavady. The town takes its name from the legend of a dog leaping into the river Roe carrying a message, or perhaps chasing a stag. This is a magical place, where the water traces its way through rock and woodland; at times, lingering in brooding pools of dark cool water under the shade of summer trees, and, at others, forming weirs and leads for water mills now long gone.

The Roe, like all rivers, is witness to history and change. To Mullagh Hill, on the west bank of the River Roe just outside the present day town of Limavady, St Columba came in 575 AD for the Convention of Drumceatt. The world is probably unaware that it knows something of Limavady; but the town is, in fact, renowned for Jane Ross's song Danny Boy, written to a tune once played by a tramp in the street.

Some 30 miles along the coast road from Limavady, one comes upon the forlorn, but imposing ruin of Dunluce Castle, which stands on a soft basalt outcrop, in defiance of the turbulent Atlantic lashing it on all sides. The jagged-toothed ruins sit proud on their rock top commanding the coastline to east and west. The only connection to the mainland is by a narrow bridge. Until the kitchen court fell into the sea in 1639 killing several servants, the castle was fully inhabited. In the next hundred years or I so, the structure gradually fell into its present I dramatic state of disrepair, stripped of its roofs by I wind and weather and robbed by man of its carved I stonework. Ruined and forlorn its aspect may be, I yet, in the haunting Celtic twilight of the long I summer evenings, it is redolent of another age, I another dream.

A mile or so to the east of the castle lies Port na Spaniagh, where the Neapolitan Galleas, Girona, from the Spanish Armada went down one dark October night in 1588 on its way to Scotland. Of the 1500-odd men on board, nine survived.

Even further to the cast, is the Giant's Causeway, a stunning coastline with strangely symmetrical columns of dark basalt-a beautiful geological wonder. Someone once said of the Causeway that it was worth seeing, but not worth going to see. That was in the days of horses and carriages, when travelling was difficult. But it is certainly well worth a visit. The last lingering moments of the twilight hours are the best time to savour the full power of the coastline's magic; the time when the place comes into its own. The tourists are gone and if you are very lucky you will be alone. It is not frightening, but there is a power in the place; tangible, yet inexplicable. The feeling is one of eeriness and longing, and of something missing, something not quite fulfilled; the loss of light and the promise of darkness; a time between two worlds. Once experienced, this feeling never leaves you: the longing haunts and pulls at you for the rest of your days.

Beyond the Causeway, connecting the mainland with an outcrop of rock jutting out of the turbulent Atlantic, is the Carrick-a-Rede Rope Bridge. Not a crossing for the faint-hearted. The Bridge swings above a chasm of rushing, foaming water that seeks to drag the unwary down, and away. 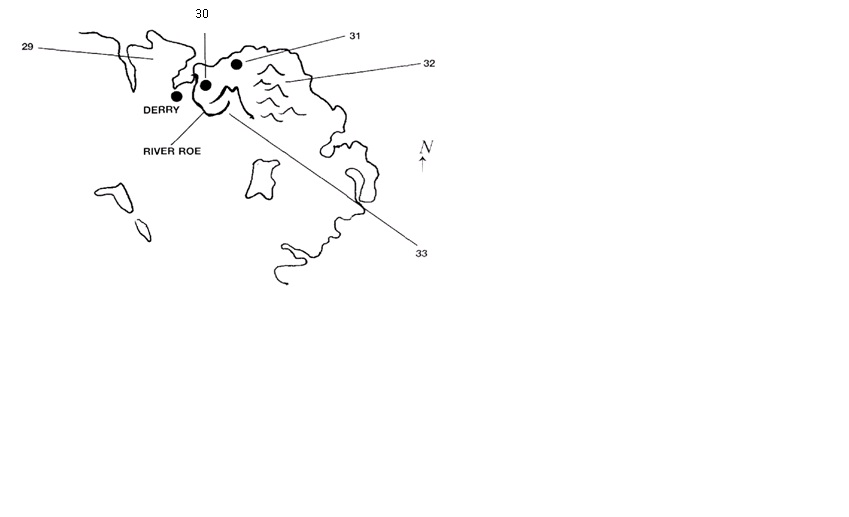 Choose one phrase (A-E) from the List of places to label the map below. Write the appropriate letters (A-E) in Boxes 1-5 on your answer sheet.