You should spend about 20 minutes on Questions 1-6, which are based on Passage below.

A ROSE BY ANY OTHER NAME WOULD SMELL AS SWEET

In the past few years, the trend has been away from hybrid tea and floribunda roses towards shrub and species roses. While this change has, in part, been driven by recent fashions in garden design coupled with adroit marketing, there is no doubt that shrub and species roses offer a number of cultural advantages. Of course, there are aesthetic considerations too: some growers preferring the wide colour range and high-centered blooms of the hybrid teas, while others choose shrub roses, because they integrate more easily into an overall garden design. This is largely a question of taste and lies beyond the scope of the present article.

Before examining the cultural advantages of shrub roses, mention should be made of their diversity and antiquity. There are three distinct races of rose, which can be traced back to the Middle Ages: the gallicas, the albas, and the damasks. Gallica roses were first recorded in the 13th century, and probably the most famous of all, Gallica officinalis, is among the flowers depicted on the famous Ghent Altarpiece, painted by the Flemish artist Jan Van Eyck in the 14th century. Another gallica, Rosa mundi, with its characteristic red and white petals has been cultivated for at least six centuries. Albas too have a long history. Alba x semiplena is the world's oldest 'working' rose and is still grown in the Kazanluk region of Bulgaria for its highly scented petals, which are harvested each June to make the perfume, attar of roses. Damasks, as the name implies, were thought to have come from Damascus. Their origin is more obscure, but they are certainly related to wild roses still growing in parts of the Middle East and Iran. There are in cultivation more recently introduced varieties of roses too, such as Bourbons, hybrid musks, and hybrid perpetuals as well as rugosas, which originate in the Far East.

As a result of this genetic diversity, shrub roses have two major cultural advantages for the horticulturalist, and the amateur gardener: resistance to disease and tolerance of a wide variety of climate and soil types. Many shrub roses show resistance to fungal diseases such as black spot and rust, to which hybrid teas are highly susceptible. Rugosas are particularly disease-free. In poor soil conditions, shrub roses, having deep vigorous root systems, are more tolerant of drought and do not suffer to the same extent from nutrient deficiency diseases. For the horticulturalist, this means that less time and money need be spent on applying fertilisers or spraying for disease. Similarly, there are some shrub roses which will grow well in shady or windy conditions, or even against a north-facing wall. Large specimen shrubs may be found growing happily in the most unpromising situations.

However, there are other practical issues to consider. Where space is at a premium, it is important to remember that the majority of shrub roses, which do not require regular hard pruning in order to encourage them to flower, will eventually grow into large bushes up to two metres high, with a spread of two to three metres. For small gardens, hybrid teas, rarely growing more than one metre tall, are more practical. The size and density of shrub roses can, however, be an advantage where a large permanent bush is required. Some varieties are sufficiently dense as to be suitable for hedging.

Another factor is length of flowering period. Many shrub roses have a short, but spectacular flowering season. The famous old rose Cuisse de Nymphe, for example, is covered in succulent pink blossom for about a month in midsummer, but does not bloom again. There are, however, other varieties, which are repeat or perpetual flowering, including Madame Isaac Pereire, probably the most intensely fragrant rose of all. Moreover, there are a number of varieties with attractive ferny foliage and graceful, arching habit. This contrasts with the upright stance and coarse leathery leaves of hybrid teas. Species roses also produce bright red fruits (hips) in September-October, and their leaves often acquire attractive autumn tints.

All these factors need to be taken into consideration when choosing a rose for a particular site. Shrub roses are long-lived, easy to propagate, and require less pruning and maintenance than a hybrid tea. A detailed catalogue of varieties will give details of colour, flowering period, size, preferences of soil and aspect, optimum planting times, and general cultural requirements. 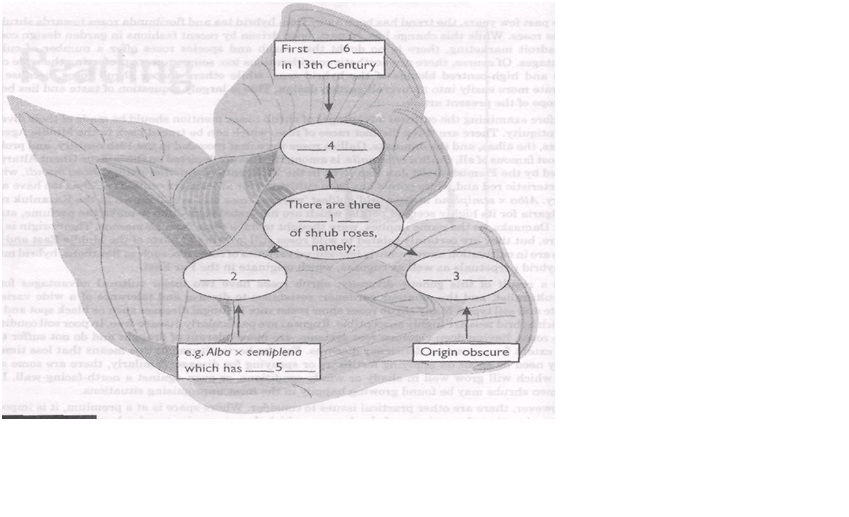 Use NO MORE THAN THREE WORDS from the passage to complete each blank in the diagram below.