All stars (like plants and animals) evolve, with each one following the same general pattern of evolution. Their journey along the evolutionary path, and ultimate fate at stellar death, is determined by their initial mass, which is measured in multiples of the solar mass of our own Sun.

Perturbations of nebulous interstellar clouds in space result in gravitational interaction, with the consequent contraction of gaseous matter to create protostars, which are much larger than the stars they will finally become. As the temperature increases, the gas becomes completely ionised to form plasma and gravitational contraction of the core then takes place. The onset of hydrogen-burning happens at a core temperature of several million degrees, and converts hydrogen to helium through nuclear fusion. The greater part of a star's evolutionary lifetime is spent hydrogen-burning and, during this period, it is said to be on the Main Sequence. The end of hydrogen-burning is marked by the evolution of a star into a red giant, when it is said to leave the Main Sequence. Burning ceases completely in the core, which undergoes gravitational contraction to maintain mechanical equilibrium.

Now, the Pauli Exclusion Principle states that 'no two identical particles can occupy the same quantum state' (Kaufmann, 1994): that is, loosely, they cannot have the same spatial location and momentum. This principle is important in determining the ultimate fate of stars. Consider low Main Sequence mass stars (that is, stars of less than three solar masses) which have passed through the hydrogen-burning phase to helium-burning. Such bodies require extreme compression of the core to raise their temperature sufficiently for the onset of helium-burning. Increasing density of electrons occurs, so that they are squashed into close proximity with each other, until a limit is reached when they resist any further compression. This phenomenon is called degeneracy, and is a manifestation of the Pauli Exclusion Principle.

Resistance to further compression results in degenerate-electron pressure which supports the core, preventing its contraction. However, this pressure is independent of temperature, and remains constant while the temperature continues to increase. Helium ignition takes place and the thermonuclear reaction proceeds at an increasing rate until a helium-flash occurs. The temperature is so great that degeneracy cannot be maintained: the core suddenly expands with a corresponding decrease in temperature that abruptly ends the helium-flash. This cycle may be repeated until all the core helium is converted to carbon.

More massive stars do not undergo a helium-flash. Moreover, their cores are sufficiently massive for further element-burning to occur, until they, too, reach a limit imposed by degeneracy. That is, as the product of each phase of element-burning is always nuclei of greater mass, it requires even greater compression of the core remnant in order to raise the temperature sufficiently high enough to initiate the next phase. Such compression can only occur until the degenerate condition is achieved.

Stellar death comes about when the core cannot carry out further element-burning, because of its degenerate nature. Stars of Main Sequence mass less than seven solar masses become white dwarfs. The stability of a white dwarf is only maintained if its final (post-Main Sequence) mass does not exceed the Chandrasekhar Limit of 1.4 solar masses. Degenerate-electron pressure supports the core against collapse, thereby conforming to the Principle.

Neutron stars are the stellar corpses of stars whose Main Sequence mass is between seven and twenty solar masses. Before death, these stars have undergone some further element-burning and the final core mass exceeds the Chandrasekhar Limit. This is too great for degenerate-electron pressure to prevent collapse of the core: electrons and protons are crushed together to form neutrons and neutrinos. Gravitational collapse continues until degeneracy equilibrium is achieved once more. It is degenerate-neutron pressure that halts the collapse, and, thereby, upholds the Principle.

The most massive stars have completed burning to obtain an iron core, and have a Main Sequence mass exceeding twenty solar masses. This is so great that degenerate-neutron pressure cannot support it, and rapid collapse ensues. Since density is inversely proportional to volume and the mass is vast, then, as the volume dwindles, the density tends to infinity and a Black Hole is formed.

Black Holes are a violation of Pauli's Exclusion Principle. If the Principle did not regulate the evolution of stars, nothing would prevent the inexorable collapse of an interstellar cloud from its initial disturbance into a massive Black Hole. 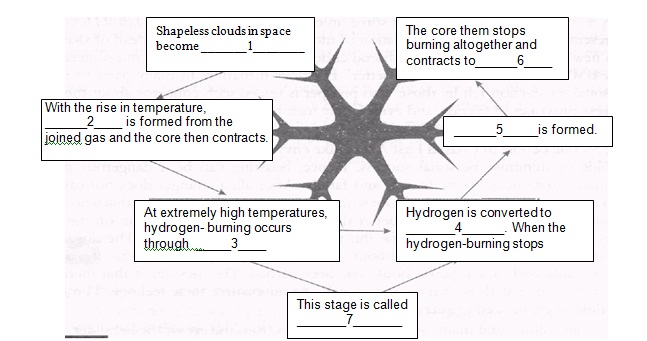 The flow chart below summarises Paragraph 1. Complete the chart with information from the passage and write your answers in Boxes 1-7 on your answer sheet.

You may use NO MORE THAN THREE WORDS to complete each space.