Bricks are one of the oldest known building materials dating back to 7000 B.C. The oldest found were sun-dried mud bricks in southern Turkey and these would have been standard in those days. Although sun-dried mud bricks worked reasonably well, especially in moderate climates, fired bricks were found to be more resistant to harsher weather conditions and so fired bricks are much more reliable for use in permanent buildings. Fired brick are also useful in hotter climates, as they can absorb any heat generated throughout the day and then release it at night.

The Romans also distinguished between the bricks they used that were dried by the sun and air and the bricks that were fired in a kiln. The Romans were real brick connoisseurs. They preferred to make their bricks in the spring and hold on to their bricks for two years, before they were used or sold. They only used clay that was whitish or red for their bricks. The Romans passed on their skills around their sphere of influence and were especially successful at using their mobile kilns to introduce kiln-fired bricks to the whole of the Roman Empire.

During the twelfth century, bricks were introduced to northern Germany from northern Italy. This created the ‘brick Gothic period,’ which was a reduced style of Gothic architecture previously very common in northern Europe. The buildings around this time were mainly built from fired red clay bricks. The brick Gothic period can be categorised by the lack of figural architectural sculptures that had previously been carved in stone, as the Gothic figures were impossible to create out of bulky bricks at that time. Bricks suffered a setback during the Renaissance and Baroque periods, with exposed brick walls becoming unpopular and brickwork being generally covered by plaster. Only during the mid eighteenth century did visible brick walls again regain some popularity.

Bricks today are more commonly used in the construction of buildings than any other material, except wood. Brick architecture is dominant within its field and a great industry has developed and invested in the manufacture of many different types of bricks of all shapes and colours. With modern machinery, earth moving equipment, powerful electric motors and modern tunnel kilns, making bricks has become much more productive and efficient. Bricks can be made from a variety of materials, the most common being clay, but they can also be made of calcium silicate and concrete.

Good quality bricks have major advantages over stone as they are reliable, weather resistant and can tolerate acids, pollution and fire. They are also much cheaper than cut stonework. Bricks can be made to any specification in colour, size and shape, which makes them easier to build with than stone. On the other hand, there are some bricks that are more porous and therefore more susceptible to damage from dampness when exposed to water. For best results in any construction work, the correct brick must be chosen in accordance with the job specifications.

Today, bricks are mainly manufactured in factories, usually employing one of three principal methods - the soft mud process, the stiff mud process and the dry clay process. In the past, bricks were largely manufactured by hand, and there are still artisanal companies that specialise in this product. The process involves putting the clay, water and additives into a large pit, where it is all mixed together by a tempering wheel, often still moved by horse power. Once the mixture is of the correct consistency, the clay is removed and pressed into moulds by hand. To prevent the brick from sticking to the mould, the brick is coated in either sand or water, though coating a brick with sand gives an overall better finish to it. Once shaped, the bricks are laid outside to dry by air and sun for three to four days. If these bricks left outside for the drying process are exposed to a shower, the water can leave indentations on the brick, which, although not affecting the strength of the brick, is considered very undesirable. After drying, the bricks are then transferred to the kiln for firing and this creates the finished product. Bricks are now more generally made by manufacturing processes using machinery. This is a large-scale effort and produces bricks that have been fired in patent kilns.

Today’s bricks are also specially designed to be efficient at insulation. If their composition is correct and their laying accurate, a good brick wall around a house can save the occupants a significant amount of money. This is primarily achieved today through cavity wall insulation.

Insulating bricks are built in two separate leaves, as they are called in the trade. The gap between the inner and outer leaves of brickwork depends on the type of insulation used, but there should be enough space for a gap of twenty millimeters between the insulating material in the cavity and the two leaves on either side. The air in these gaps is an efficient insulator by itself. Cavity walls have also replaced solid walls, because they are more resistant to rain penetration. Because two leaves are necessary, a strong brick manufacturing industry is essential, so that enough good quality insulating bricks are plentifully available. 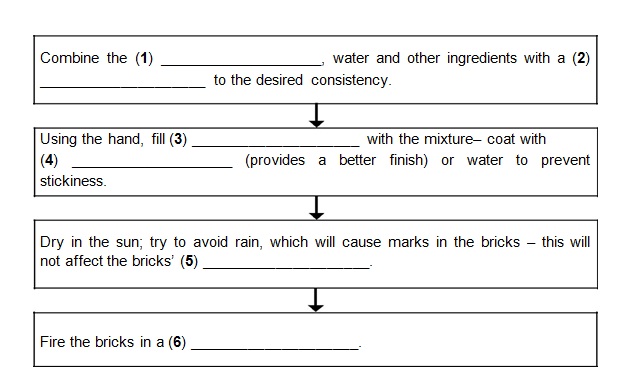 Complete the flow chart below. Write NO MORE THAN TWO WORDS from the text for each answer. Write your answers in boxes 6 – 11 on your answer sheet.

All rights are Reserved