One substance everyone uses every day is soap, whether it be for washing our hands using a bar of soap, doing the laundry or washing the floor with detergent. Technically, soaps are ionic compounds from fatty acids and they are used for a variety of cleaning purposes. Soaps allow particles that cannot usually be dissolved in water to be soluble and then be washed away.

Although made in a different way, synthetic detergents operate in a similar fashion. The human skin is under daily attack from various things, such as scorching sun, drying winds, biting cold weather, bacteria and dirt, and so our distant ancestors learned quickly that preserving the health of skin is a way for better and longer life. Popular in different civilisations, the benefits of soap finally managed to appeal to a wide European population in the 17th century, and, since then, the tradition of maintaining high personal hygiene has experienced only constant growth. With its ability to clean people’s clothes and disinfect their surroundings from harmful bacteria and dirt, soaps remain one of the most useful and fundamental hygiene tools that mankind ever created.

The first concrete evidence we have of a soap-like substance is dated around 2800 BC. The first soap makers were Babylonians, Mesopotamians, Egyptians, as well as the ancient Greeks and Romans. All of them made soap by mixing fat, oils and salts. Soap was not made and used for bathing and personal hygiene, but was rather produced for cleaning cooking utensils or goods or was used for medicinal purposes. According to Roman legend, their natural soap was first discovered near a mount called ‘Sapo’, where animals were sacrificed. Rain used to wash the fat from sacrificed animals along with wood ashes into the River Tiber, where the women who were washing clothes in it found the mixture made their washing easier. It is a nice story, but unfortunately there is no such place on record and no evidence for the mythical story.

Soaps today come in three principal forms: bars, powders and liquids. Some liquid products are so viscous that they are gels. Raw materials are chosen according to many criteria, including their human and environmental safety, cost, compatibility with other ingredients, and the desired form and performance characteristics of the finished product. In ancient times, soap was made from animal fats and wood ashes. Today, it is still produced from vegetable or animal fats and alkali. The main sources of fats are beef and mutton tallow, while palm, coconut and palm kernel oils are the principal oils.

In the early beginnings of soap making, it was an exclusive technique used by small groups of soap makers. The demand for early soap was high, but it was very expensive and there was a monopoly on soap production in many areas. Over time, recipes for soap making became more widely known, but soap was still expensive.

Modern soap was made by the batch kettle boiling method until shortly after World War II, when continuous processes were developed. Continuous processes are preferred today, because of their flexibility, speed and economics. The first part of the manufacturing process is to heat the raw materials to remove impurities. This is followed by saponification, which involves adding a powerful alkali to the heated raw materials. This releases the fatty acids (known as ‘neat soap’) that are the basis of the soap and a valuable by-product, glycerine.

The glycerine is recovered by chemical treatment, followed by evaporation and refining. Refined glycerine is an important industrial material used in foods, cosmetics, drugs and many other products. The next processing for the soap is vacuum spray drying to convert the neat soap into dry soap pellets. The moisture content of the pellets will be determined by the desired characteristics of the soap bar. In the final processing step, the dry soap pellets pass through a bar soap finishing line. The first unit in the line is a mixer, called an amalgamator, in which the soap pellets are blended together with fragrance, shades and all other ingredients.

The mixture is then homogenised and refined through rolling mills and refining plodders to achieve thorough blending and a uniform texture. Finally, the mixture is cut into bar-size units and stamped into its final shape in a soap press.

The history of liquid soaps and gels started only recently, when the technological and chemical advancements of the modern age enabled countless inventors to start experimenting with more complicated recipes. The first appearance of liquid soap happened in the mid 1800’s with the exploits of several inventors. In 1865, William Sheppard patented liquid soap; however, popularity of this product would not arrive until the creation of Palmolive soap in 1898 by B.J. Johnson.

Advancements in modern chemistry enabled the creation of shower gel. The main difference between liquid soaps and shower gels is that gels do not contain saponified oil. They are based mostly on petroleum, have numerous chemical ingredients that help the easier cleaning of skin, lather better in hard water areas, do not leave a residue on the skin and bathtub, and are in a balanced PH state, so that they do not cause skin irritations. Because some shower gels can cause drying up of the skin after use, many manufacturers insert various moisturisers into their recipes. Some use menthol, an ingredient that gives skin a sensation of coldness and freshness. 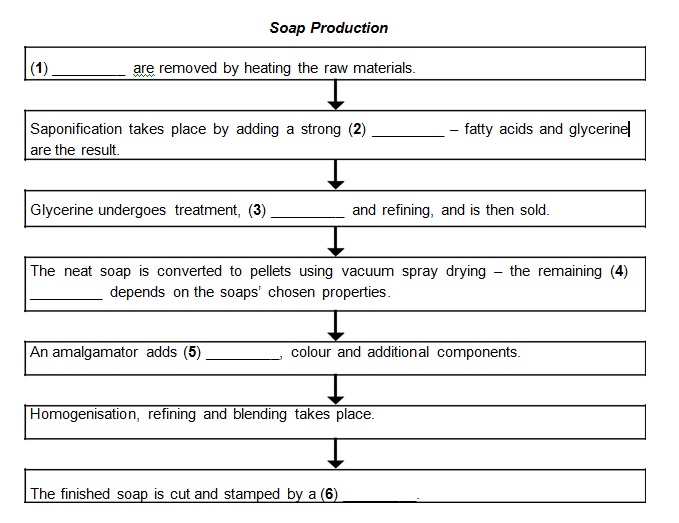 Complete the flow chart below. Write NO MORE THAN TWO WORDS from the text for each answer. Write your answers in boxes1-6 on your answer sheet.