The igloo is the traditional shelter of Inuit living in the far northern regions. They are built of blocks of snow in a circular shape, in which the walls curve inward towards the top to form a snow vault with a self-supporting arched ceiling. An outstanding example of human ingenuity and adaptability to the environment, the igloo retains heat and protects against the cold, since snow and ice act as excellent insulation. The design includes a tunnel entrance that forms a cold trap to preserve heat inside. The sleeping and sitting areas are raised above this and so maintain a higher temperature.

A similar construction is the ‘quinzhee’, which is a shelter made by hollowing out a pile of settled snow, and is only for temporary use. In contemporary times, this type of snow shelter has become popular among those who enjoy winter camping, as well as in survival situations. Some contemporary Inuit though continue to use igloos, especially as temporary shelters while hunting. However, the warming climate of the early twenty-first century has reduced the availability of appropriate snow for igloo construction. Although the traditional art of igloo construction by Inuit natives may have declined, the igloo and variations upon it, such as ice hotels, have gained in popularity among those who enjoy the winter experience.

An igloo in the Inuit language simply means house and the Inuit do not restrict the use of this term exclusively to snow houses, but include traditional tents, sod houses, homes constructed of driftwood, and modern buildings. Although the origin of the igloo may have been lost in antiquity, it is known that Inuit have constructed snow igloos for hundreds of years. Living in an area where snow and ice predominate, particularly in the long dark winter above the Arctic Circle, the igloo is the perfect shelter. Snow is used because the air pockets trapped in it make it an excellent insulator. Outside, temperatures may be as low as minus 45 degrees Celsius, but inside an igloo, the temperature may range from minus 7 degrees Celsius to 16 degrees Celsius when warmed by body heat alone. A highly functional shelter, the igloo is also aesthetically pleasing, with its shape being both strong and beautiful.

In order to build an igloo, there is a fairly standard procedure. The first thing to do is to find a good spot. It is vital to choose a safe location away from avalanche prone slopes. Next, mark a circle in the snow. For two people, a circle of around two meters diameter is needed, and for four people, around four meters. The igloo body is the next step. Shovel a pile of snow into a large, reasonably steep mound and try and keep the sloping sides at an angle of around 35 degrees or higher, which is best for stability. Wide, short snow shelters are more prone to collapse. If possible, mix snow of different temperatures to help it to harden. The entrance is done by digging a trench downwards into the snow towards the mound. This should be on the downhill side and out of the wind. The snow that is being removed from the trench should be placed on top of the mound. In these conditions, make the trench as deep as a standing man. Then, leave everything for about 90 minutes if possible. Next, finish the tunnel entrance.

Make the tunnel slightly wider than a body’s width and dig at a slightly upward angle. Ideally, the floor of the snow shelter should be at least 30 centimeters above the entrance, which will help prevent warm air from escaping the shelter. After the initial entrance is made, it is easier to hollow the inside from the top down. The walls should be thirty to sixty centimeters thick, and if the inside walls are smoothed, this will help prevent dripping. Leave an elevated platform for sleeping on. As heat rises, the occupants will be in the warmest part of the igloo for sleeping. A very important point is to make an air vent in the wall of the shelter, which will prevent the occupants from suffocating in the night. Finally, block the entrance with a block of snow or a rucksack.

Igloo hotels are a new variation on the traditional igloo. In several winter destinations, villages of igloos are built for tourists, where the guests use sleeping bags that sit on top of reindeer hides in overnight stays. Ice hotels are found in many places in Norway, Finland, and Sweden, and are constructed each winter and melt in the spring. The Ice Hotel in the village of Jukkasjärvi, located next to the town of Kiruna in Sweden, is a famous attraction. Originally, the creators started out building a simple igloo, which later turned into the elaborate and now famous ‘hotel’. It is made from the waters of the adjacent river Torne, the pure waters of which produce beautiful clear ice used to create interior decorations, which are made entirely of snow and ice.

The igloo is a subject that has fascinated people from all over the world. Although the traditional art of igloo construction by Inuit natives may have declined, the igloo and variations on it have gained in popularity among those who enjoy the novelty and winter experience. 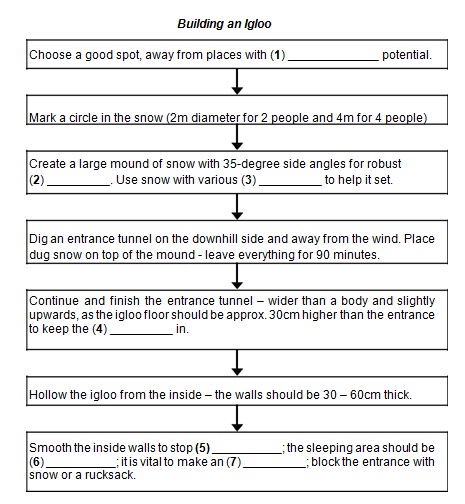 Complete the flow chart below. Write NO MORE THAN TWO WORDS from the text for each answer. Write your answers in boxes 1– 7 on your answer sheet.