The Sun: Our Nearest Star

The Sun is our nearest star and it dominates our sky from a distance of ‘only’ 150 million kilometres. Even though it appears to be the same size as the full Moon, it is over 400,000 times brighter, and dictates when we have night and day here on Earth. The Sun is the largest body in the Solar System and it is also the most massive, containing 99.9 per cent of the total mass of all the planets, moons, dwarf planets, asteroids and comets combined. This concentration of mass, and the accompanying gravitational force, is why the Sun sits at the very centre of the Solar System, pulling all the other bodies in orbit around it. We are entirely dependent on the Sun for the habitability of our planet, as it provides us with the energy in the form of heat and light that we require to survive. But it also brings many potential hazards, from the continual flow of hazardous radiation that always lurks just beyond Earth’s atmosphere, to the sporadic and violent space weather that threatens much of our society’s infrastructure.

Given that the Sun has a volume that is over a million times that of the Earth, yet contains only 330,000 times the mass, we can immediately deduce that its average density is far lower than that of a terrestrial planet. Indeed, the average density is about the same as that of water, and less than a quarter of the density of the Earth. The Sun is made mainly of the lightest elements, hydrogen (the Sun’s fuel) and helium, in a gaseous form.

The source of the Sun’s energy remained a mystery until Einstein’s 1905 special theory of relativity highlighted the promise of efficient nuclear fusion. For nuclear fusion to occur, matter needs to be under conditions of tremendous pressure and of extreme heat, so that the electric repulsion can be overcome, and the nuclei get close enough to smash into each other. It was the English astronomer Sir Arthur Eddington who realised in the 1920’s that the physical conditions within the core of the Sun were extreme enough to permit the necessary nuclear reactions. The Sun converts 600,000 million kilograms of hydrogen to helium every second to sustain its phenomenal energy output.

Beyond, there is a thin layer of gas that surrounds the photosphere called the chromosphere.

Finally, the corona is another layer of gas that extends a long way outside of the Sun.

Observations of more evolved objects around us in the galaxy lead to our understanding of the eventual fate of the Sun. The Sun has sufficient hydrogen at the right temperature and density to continue creating helium for a further six billion years. Then, the supply of fuel, and all possibility of future nuclear reactions, will eventually be exhausted. By this point, the Sun will appear very different from how it does today. It will have become a red giant; a much cooler, redder and far more bloated version of itself, with an atmosphere puffed so large as to swallow up the planets Mercury and Venus and make conditions pretty uncomfortable on Earth. Eventually, the outer envelope of the red giant will be lost, expanding away to form a planetary nebula. The remaining hot core of the star will be left exposed as a white dwarf, which will slowly cool and fade over billions of years, until finally fading into a cold, dark and dense ball of compressed matter.

From time to time, there are eruptions of matter from the Sun. The magnetic energy in an exceptionally powerful sun flare can heat and speed up a huge cloud of charged particles to form a coronal mass ejection. The cloud produced by such an eruption escapes away out into interplanetary space, but can cause concern if directed towards Earth. When a coronal mass ejection reaches the Earth, it rattles the Earth’s magnetic field to generate what is known as a ‘geomagnetic storm’. The occurrence of the flare gives us advance notice of this event and that it will arrive between 15 hours and a couple of days later, depending on how fast it’s moving, and how clear the passage between Sun and Earth is. The major effect for humans of a coronal mass ejection is on our satellites, which can be seriously damaged. Power cuts on Earth can also take place.

Although we may now understand the basics of the Sun, we remain unable to reliably predict everything about it. There is much still to understand and learn about it, and it seems the more intensely it is studied, the more questions there are to answer! 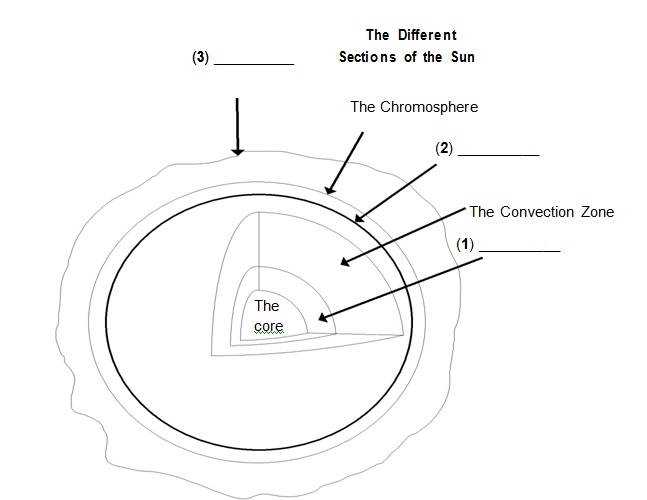 Label the diagram below.

Write NO MORE THAN THREE WORDS from the text for each answer.