Islands are not known for their mobility but, occasionally it occurs. Natural floating islands have been recorded in many parts of the world (Burns et al 1985). Longevity studies in lakes have been carried out by Hesser, and in rivers and the open sea by Boughey (Smithsonian Institute 1970). They can form in two common ways: landslides of (usually vegetated) peaty1 soils into lakes or seawater or as a flotation of peat soils (usually bound by roots of woody vegetation) after storm surges, river floods or lake level risings.

The capacity of the living part of a floating island to maintain its equilibrium in the face of destructive forces, such as fire, wave attack or hogging and sagging while riding sea or swell waves is a major obstacle. In general, ocean-going floating islands are most likely to be short-lived; wave wash-over gradually eliminates enough of the island’s store of fresh water to deplete soil air and kill vegetation around the edges which, in turn, causes erosion and diminishes buoyancy and horizontal mobility.

The forces acting on a floating island determine the speed and direction of movement and are very similar to those which act on floating mobile ice chunks during the partially open-water season (Peterson 1965). In contrast to such ice rafts, many floating islands carry vegetation, perhaps including trees which act as sails. In addition, Burns et al examined the forces acting and concluded that comparatively low wind velocities are required to establish free-floating islands with vegetation standing two meters or more tall.

The sighting of floating islands at sea is a rare event; such a thing is unscheduled, short-lived and usually undocumented. On July 4th, 1969, an island some 15 meters in diameter with 10-15 trees 10-12 meters tall was included in the daily notice to mariners as posing a shipping navigation hazard between Cuba and Haiti. McWhirter described the island as looking “...as though it were held together by a mangrove-type matting; there was some earth on it but it looked kind of bushy around the bottom, like there was dead foliage, grass-like material or something on the island itself. The trees were coming up out of that. It looked like the trees came right out of the surface brown layer. No roots were visible”. By the 14th of July the island had apparently broken up and the parts had partially submerged so that only the upper tree trunks were above the water. By July 19th, no trace of the island was found after an intensive six hour search.

Another example albeit freshwater, can be found in Victoria, Australia - the floating islands of Pirron Yallock. Accounts of how the floating islands were formed have been given by local residents. These accounts have not been disputed in scientific literature. Prior to 1938, the lake was an intermittent swamp which usually dried out in summer. A drainage channel had been excavated at the lowest point of the swamp at the northern part of its perimeter. This is likely to have encouraged the development or enlargement of a peat mat on the floor of the depression. Potatoes were grown in the centre of the depression where the peat rose to a slight mound. The peat was ignited by a fire in 1938 which burned from the dry edges towards a central damp section. A track was laid through the swamp last century and pavement work was carried out in 1929-30. This causeway restricted flow between the depression and its former southern arm. These roadworks, plus collapse and partial infilling of the northern drainage channel, created drainage conditions conducive to a transition from swamp to permanent lake.

The transformation from swamp to lake was dramatic, occurring over the winter of 1952 when rainfall of around 250mm was well above average. Peat is very buoyant and the central raised section which had been isolated by the fire, broke away from the rocky, basalt floor as the water level rose in winter. The main island then broke up into several smaller islands which drifted slowly for up to 200 meters within the confines of the lake and ranged in size from 2 to 30 meters in diameter. The years immediately following experienced average or above average rainfall and the water level was maintained. Re-alignment of the highway in 1963 completely blocked the former south-east outlet of the depression, further enhancing its ability to retain water. The road surface also provided an additional source of runoff to the depression.

Anecdotal evidence indicates that the islands floated uninterrupted for 30 years following their formation. They generally moved between the NW and NE sides of the lake in response to the prevailing winds. In 1980, the Rural Water Commission issued a nearby motel a domestic licence to remove water from the lake and occasionally water is taken for the purpose of firefighting. The most significant amount taken for firefighting was during severe fires in February 1983. Since then, the Pirron Yallock islands have ceased to float, and this is thought to be related to a drop in the water level of approximately 600 mm over the past 10-15 years. The islands have either run aground on the bed or the lagoon or vegetation has attached them to the bed.

Floating islands have attracted attention because they are uncommon and their behaviour has provided not only explanations for events in myth and legend but also great scope for discussion and speculation amongst scientific and other observers. 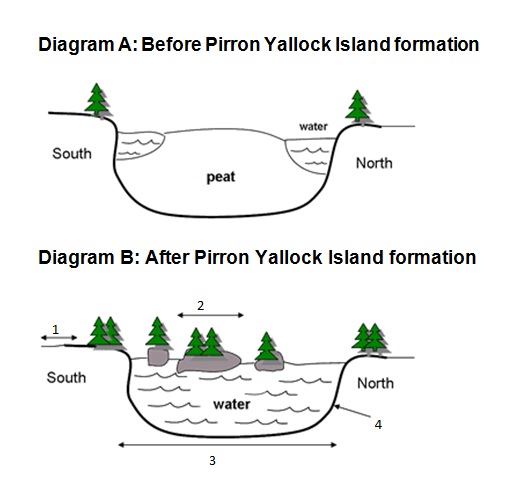 Complete the labels on Diagram B below.

Write the correct letter A-H in boxes 1-4 on your answer sheet.