Although many people would no doubt think it impossible, social psychologists over the past several decades have been attempting to categ­orise and quantify the notion of love. And while there may never be agreement on how this is best done, much of the research to date is quite thought-provoking.

Sternberg (1986) sees love in terms of the interplay between three independently quantifiable aspects: passion, intimacy and decision/commit­ment. Sternberg defines passion as the romantic and sexual components of a relationship. Inti­macy is the degree of closeness a person feels for another. Decision/commitment concerns both one's decision about being in love with a person and, once in an established relationship with that person, how committed one is to loving one's partner.

The intensity of each of the three aspects tells us how a love relationship can be characterised. If decision/commitment is strong, for example, but intimacy and passion are low, then the result is empty love, according to Sternberg. He defines liking, meanwhile, as the type of love resulting from a high degree of intimacy but low decision/commitment and passion. When pas­sion is the only component that is strongly felt, this means that infatuation best describes the relationship. Romantic love occurs when there is a balance of passion and intimacy at rela­tively high levels but there is little decision/ commitment. When all three aspects are more or less equally balanced, however, the relation­ship can be called one of consummate love, and this, says Sternberg, is probably the health­iest in terms of the longevity of the relationship and the happiness of the partners.

In yet another categorisation of love, Lee (1973) divides the emotion into six different styles, each with its own name:

Lee believes most people feel or experience love as a combination of two or more of the above styles, and that both partners may approach their relationship with styles that are sometimes compatible and sometimes not. Hendrick and Hendrick (1986) investigated how men and women categorise their feelings and experiences of love using scales developed to measure Lee's six styles. They found that women scored higher on storge, pragma and mania styles, while men scored higher on Indus.

In a subsequent study, Hendrick and Adler (1988) looked at how men's and women's scores for the six love types correlated with satisfaction in their love relationships. The findings were that a relationship was more likely to be satisfactory if eros and agape scores for both partners were high, while a high score of ludus was more common in relationships marked by dissatis­faction.

The question of why different types or styles of love exist may best be addressed by attachment theory. The theory is based on observations of infants developing attachments to adults interpreted by Bowlby (1980) as a natural, evolutionary behaviour that promotes survival of the infant by staying close to adults when there is danger. Ainsworth et al. (1978) divide attachment behaviour into three types: secure, anxious-ambivalent and avoidant. A secure attachment style forms when the infant and the care-giving adult interact with consistent caring and regular physical contact, giving the infant confidence to explore the world with little fear. When the adult gives care inconsistently or tries to interfere too much in the infant's activities, the attachment style is more likely to be anxious-ambivalent. An avoidant style results from regular refusal by the care-giving adult to give attention or physical contact to the infant,

Hazan and Shaver (1987), believing love to be a form of attachment, speculate that early attach­ment styles extend into adulthood and charac­terise a person's style of showing love for another person. They base their suppositions on the reported histories of over 1200 people, who wrote of both their adult romantic experience and their relationships with their parents. Adults with secure attachment styles reported that they found it fairly easy to get close to other people and enjoy a relationship characterised by mutual dependence. Moreover, there was little fear of being rejected by others. Those with avoidant attachment styles said they were not comfortable getting close to others, found it difficult to trust others completely and did not like having to rely on others. People in the anxious-ambivalent category felt their partners did not wish to become as intimate with them as they them­selves would have liked. They also worried that they were not loved by their partners and con­stantly fretted about their romantic relationships 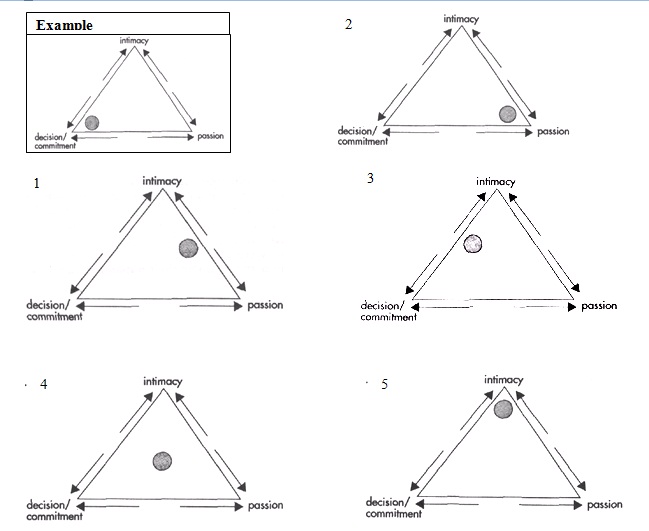 There are several diagrams illustrating the triangular relationship of passion, intimacy and decision/commitment, as defined by Sternberg (1986) in Reading Passage. Look at each diagram and determine whether it illustrates:

F    no information in the reading passage.

Write the appropriate letters A-F in boxes 1-5 on your answer sheet.