Comets arrive to grace our skies every year; some are new to the inner Solar System, and some are old friends on a repeat visit, but only comparatively rarely do they reach sufficient brightness to become apparent to the unaided eye.

Comets do not behave like any other object that we can observe in the night sky with the unaided eye. Stars remain fixed in the pattern of their constellations, and are regular in their motion through the sky from one night to the next, and from one month to the next. A planet follows a fairly slow but expected path. By comparison, a comet is a totally different kind of event: it will appear unexpectedly and at any place in the sky, it will change position from one night to the next relative to the background of stars, and its path will be along a separate direction and path across the sky from the planets and stars. During the few weeks or months that it is observable, it will first steadily increase in brightness from one night to the next, may change its shape – growing bigger, longer or extra tails – and then wane to invisibility, never to be seen again. Throughout history, comets have always signified evil, war and death, and they were supposed to leave chaos and calamity in their wake. Indeed, plenty of past comets have been blamed by the astrologers of their day for bringing or marking misfortune.

There have been many spectacular comets throughout history; on average we are visited by what is termed a ‘great comet’ about three times a century. This appellation is saved for those comets that reach exceptional brightness. The most famous of all comets is Halley’s comet; not that it is the most spectacular, but study of its orbit by the English astronomer, Edmond Halley, was fundamental to pinning down the real nature of comets. During the 17th century, Halley was using Newton’s new mathematics of calculus to try to characterise the orbits of twenty-four comets from sightings recorded over the previous four centuries. He realised that the orbital path of the bright comet recently seen in 1682 was very similar to that followed by two other comets – one observed in 1531 and one in 1607. All moved in a retrograde direction (i.e. opposite to the revolution of the planets round the Sun), following an elliptical orbit that had a similar orientation to the plane of the planets’ motion.

The great comet of 1456 was also known to have travelled in a retrograde direction. Halley’s inspiration was to realise that these were four apparitions of the same comet, following a set path around the Sun, but which only became apparent to observers on Earth when its orbit returned the comet to the inner Solar System, after an interval of about 76 years. Although he did not live to see the success of his prediction of the comet’s return in 1758, when the comet was spotted on schedule, it was given his name. Subsequently, at least 23 previous appearances of Halley’s comet have been identified from historical records, the first known being from a Chinese text dating from 240BC.

The nucleus is the sole solid component of a comet, and the only part that is always present. It resembles a dark-coloured iceberg; it is a frozen chunk of ice ranging between 5 to 20 km in size, and with a somewhat irregular shape. The ice is not just water ice, but also contains the ices of frozen ammonia, carbon dioxide, methane and carbon monoxide. The ices are blackened, as they contain small fragments of dust embedded within them, and the whole nucleus is of a low density, suggesting it to be a partially porous body. When travelling along the outer reaches of its orbit, far from the Sun, the nucleus remains frozen and dormant.

As soon as its path brings the icy block into the inner Solar system, it begins to warm up and its surface becomes active. The solid ice turns directly into gas, in a process known as ‘sublimation,’ and is liberated from the surface. The process is particularly apparent on the sunward flank of the nucleus, where the gases escape as jets, particularly through any fissures that open up in the structure. These jets also push out the particles of solid dust that are embedded in the ice.

The closer an orbit brings a nucleus to the Sun, the warmer it becomes, and the more spectacular tails are generated with them, sometimes being visible during the day. There are two types of comet tails: dust and gas ion. A dust tail contains small, solid particles that are about the same size as those found in cigarette smoke. This tail forms because sunlight pushes on these small particles, gently shoving them away from the comet’s nucleus.

Because the pressure from sunlight is relatively weak, the dust particles end up forming a diffuse curved tail in the direction of the comet’s orbit. A gas ion tail forms when ultraviolet sunlight rips one or more electrons from gas atoms in the coma, making them into ions. The solar wind then carries these ions straight outward away from the Sun. As a comet heads away from the Sun, its tails dissipate, and the matter contained in its nucleus freezes into a rock-like material. 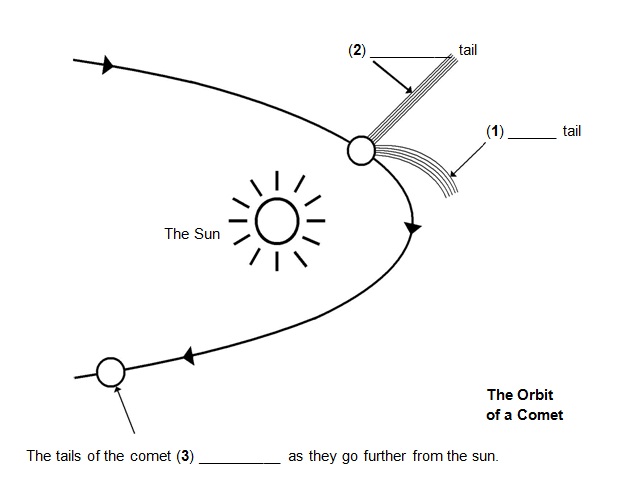 Label the diagram below. Write NO MORE THAN TWO WORDS from the text for each answer. Write your answers in boxes 1 - 3 on your answer sheet.